About 100 years ago, archeologists discovered seventy clay fragments (pieces) of unusual circular trumpets in the ancient city of Numantia, Spain.  When put together, these pieces make about 40 complete trumpets, making this one of the largest discoveries of musical instruments from ancient Europe.  The people that lived in Numantia were a Celtic tribe, that we now call Celtiberians.  They lived approximately 200-100 BCE and were known for resisting Roman aggression.

These clay trumpets were very important for the Celtiberians because they were used for rituals and during battle.  How do we know this?  Because a Greek historian named Appiano wrote something about it. He wrote that on one occasion, the Celtiberian warriors avoided playing their trumpets in order to make a surprise attack on the Romans who were trying to cut off their water supply by blocking a river.  This reveals that the Romans would have expected to hear the Celtiberian trumpets before battle.

The Celtiberians were known for their excellent pottery work, which is obvious from looking at the clay trumpets from Numantia.  After carefully studying the pieces that the archeologists discovered, Dr. Raquel Jiménez decided to try and make some herself so she could learn how they were made and hear how they sounded.  Her team ran into a problem though -  it turns out that it is very difficult to make a tube out of clay, and even more difficult to bend that tube into a circle without breaking it.  After lots of trial and error, Raquel and her team solved the mystery and were able to make several playable clay trumpets.

See a video (scroll down) of trombone players Rubén Perelló Blanquer and María José Úcar, playing an original archeological trumpet together with a replica, made during the experimental reproduction lead by Raquel Jiménez under the auspices of the European Music Archaeology Project (EMAP).

How they were made:

First, a circular tube was made by shaping both the inside and outside of the tube on a potter's wheel from a piece of clay in the shape of a ring (as shown below), and then joining the tube at the top edge: 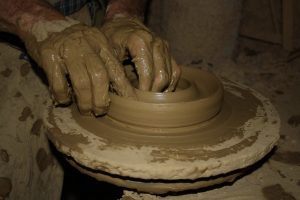 A bell and mouthpiece were made separately, also on a potter's wheel: 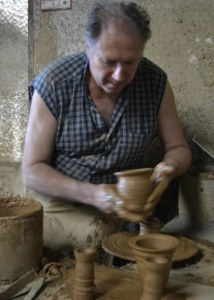 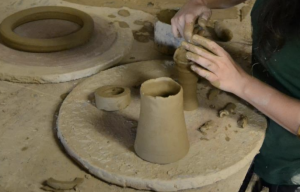 Next, the tube was cut, allowing the bell to be attached on one open end, and the mouthpiece on the other: 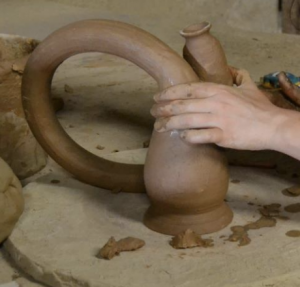 Finally, after painting some of the trumpets with geometric designs, they were all fired in a kiln. After three days, they were taken out and were ready to be played! 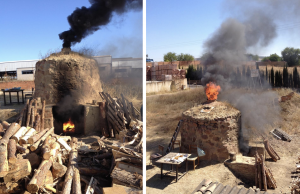