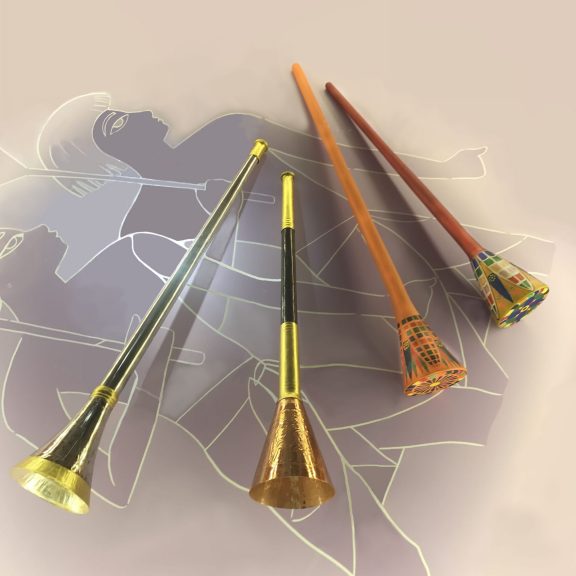 As seen at the European Music Archeology Project (EMAP) exhibition 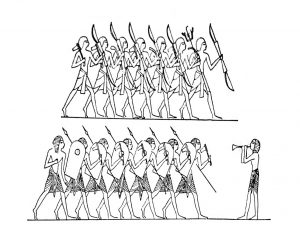 The "Tut" trumpet is the nickname that Dr. Peter Holmes uses when he talks about the trumpets that were discovered in the tomb of the Egyptian King Tutankhamen, also known as "King Tut." Before these trumpets were found, archeologists—people who study human history by examining objects and other physical remains—had seen iconography (images) of Egyptians playing straight trumpets. These trumpets are called Snb ("sne-heb") in the Egyptian written symbols known as hieroglyphics. Snb are shown most often directing troops in battle, but they are also depicted with the Egyptian God of the afterlife, Osiris, who some believe invented the trumpet.

British archeologist Howard Carter found Tutankhamen's tomb in 1922. It took eight years to remove the 5,000 items that were found inside, which were taken to the Cairo museum in Egypt. Among the treasures they found were two trumpets, one made of copper and the other of silver, that looked exactly like the ones seen in iconography. This is how experts were certain that the objects were trumpets, because the images showed them being held up to the mouth to be played.

The "Tut" trumpets were very fragile, but in 1939 a British trumpeter was asked to play them for a radio broadcast, for the world to hear. Unfortunately, the trumpeter stuck his modern trumpet mouthpiece into the end, and severely damaged one of the trumpets. It was repaired, and he did eventually play both trumpets for the radio broadcast, using his own mouthpiece. The mouthpiece of the Snb is simply a ring attached to the end of the tube (see gallery below) which makes it challenging to play compared to a modern mouthpiece. Also, the notes that can be played sound very different when a modern mouthpiece is used, so what the world heard on the radio in 1939 wasn't at all how the trumpets would have sounded 3000 years ago. Regardless, it captured the imagination of people everywhere, and Tutankhamen's trumpets often tour around the world as part of an exhibition of his treasures to this day. 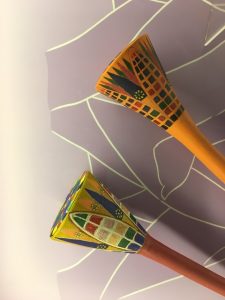 One of the unique features of the "Tut" Trumpets is that they were found with wooden cores inside, painted colorfully to look like the flower and stem of a lotus. No one knows for sure why the trumpets had cores. They could have been used as mandrels (forms) to help in construction of the trumpets, or they could have been used to protect the trumpets during transportation. Having studied the "Tut" trumpets extensively, Dr. Peter Holmes has made many replicas (copies) over the years. Most recently, he made very detailed replicas for the European Music Archeology Project's (EMAP) touring exhibition. For this exhibit he was also asked to make the wooden cores. Dr. Holmes believes that the cores had a symbolic meaning. When the trumpet was not being played, the core would be hidden inside, just as the lotus disappears into the water at dusk. When the core was removed, the voice of the trumpet could sound again, just as the lotus flower reappears with the rising sun, renewed and reborn. These cores may have been made especially for the trumpets that were buried with Tutankhamen, so that when he was reborn into the next life, the cores could be removed, and the trumpets would sound again.

We first met Dr. Holmes at the EMAP conference in Italy in 2015. He brought several replicas of ancient trumpets to present to the attendees, one of them being a copy of the silver "Tut" trumpet, which was played as part of a demonstration by Italian trumpeter Gabriel Cassone. After the conference was over, to our astonishment, Dr. Holmes gave us his "Tut" trumpet, and we have been sharing it with teachers and their students ever since. (see video below).

Did you know that you can make your own Egyptian Snb? Dr. Holmes helped us to create instructions for making a playable Snb which you can download here. Thank you Peter!

See the story behind the playing of the “Tut” trumpets in 1939.